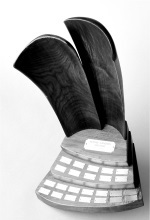 The trophy is presented to a person, group or club for outstanding contributions to safety in our sport. It was given to the Soaring Association of Canada by the Rideau Gliding Club in 1989 in memory of the late Hank Janzen whose main goal in the sport was safety – yet he fell victim to a "safety issue". The trophy was created from the propeller blades of Hank's towplane.

Individuals, committees, and clubs are invited to submit recommendations to the Flight Training & Safety committee, which is responsible for the selection of the recipient.

If you know of an individual, group of individuals or a club that is deserving of this trophy, please submit an  pdf application form (40 KB)  to the Flight Training & Safety Committee.

The Berkeley Roden Rose Bowl was donated to the Soaring Association of Canada in 1947, by Mr. Berkeley Roden of A.V. Roe (Canada) Ltd, Montreal. It is a gleaming silver rose bowl standing ten inches high on an ebony base. Originally, this trophy was awarded annually to the club which has demonstrated during the year the best utilization of its gliding equipment.

1998
Encourage clubs to develop and recognize the achievements of their pilots through the FAI awards system – A, B, C, Silver C, Gold and Diamond badges, records, achieved within a club over the year, relative to the club's size. R = 100 (X+2Y+3Z)/M

2007
All badge legs will now be used in the formula since counting completed badges doesn't adequately reflect an ongoing club effort to recognize and encourage all post-solo achievement. Bronze badges will be valued at 3X to reflect their major importance to clubs as the "kick-start" step in continued growth in post-solo pilot skills and working towards other badges.

Clubs are invited to submit an  pdf application form (273 KB)  for the Roden Trophy to recognize their club's achievements.

The Walter Piercy Award was presented to the Association in 1964 by Walter Piercy, past chairman of the Instructors committee, to be awarded to an instructor who contributes to an outstanding year to his club. This award is won essentially for achieving the most instructing flights in the club in the year, adjusted for numbers of instructors in the club and numbers of instructing flights in the club. Contributions such as organization of cross country courses, ground school lectures, club offices held, and other club positions such as being in charge of aircraft maintenance also count toward this trophy. Club CFIs submit names annually to the Flight Training & Safety committee who select the winner.

Clubs are asked to submit an  pdf application form (72 KB)  annually to recognize an instructor at their club. 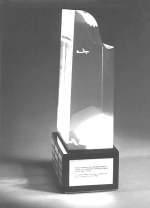 This trophy is presented annually to the Canadian soaring pilot who has obtained the maximum absolute altitude in a flight in Canada, provided that the height gain has been 5000 metre or better. The 20 inch high trophy features a small pewter sailplane suspended within a solid block of plastic shaped to represent a classic mountain wave scene. It symbolizes the unique tranquility and beauty of high altitude wave flight. It was commissioned and donated by Klaus S. Stachow of the Cu Nim Gliding Club to the Soaring Assoiation of Canada in 1982 to recognize excellence in high altitude flight and to commemorate the 10th Cowley summer camp. The trophy was designed by Cu Nim's Tony Burton of Claresholm, Alberta.

2004
The structure of the Cowley Block has resulted in several ties at 28,000 feet. In a tie for absolute altitude, the winner be the pilot with the greatest altitude gained.

Jim McCollum was the Treasurer for SAC from 1985, then also Executive Director from 1994 to 2009. He was known for his innovation with SAC finances and for promoting the sport. When the federal government withdrew support for amateur sports, Jim managed investments for SAC funds with the goal of making SAC more financially independent. Those funds have grown to over a million dollars and the interest earned annually has allowed SAC financial flexibility and independence to advance many programs and keep membership fees relatively low.

In recognition of his many achievements and dedication to SAC and the advancement of soaring in Canada the "Jim McCollum Award for Innovation" will be given annually to a member or club who has furthered the sport of soaring in their club or SAC through imaginative fundraising, organizational restructuring, or creative financing. The awardee's efforts may have increased membership dramatically, improved the club fleet substantially, or increased the clubs/SAC financial assets significantly.

Click here to nominate an individual or a group. 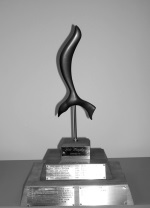 200 Trophy
"Best six flights by a pilot with 200 hours or less"
A stylized gull soars above a three tiered wooden base; including the base, the trophy is 40 cm high. It was donated to the Association by Inger and Paul Tingskou of the Winnipeg Gliding Club.

Original Formula
It is awarded annually to the pilot with less than 200 hours solo gliding time at the beginning of the season (January). Scoring for this new trophy is identical to that normally used or the Canadair trophy (best five flights during the year); all flights must originate in Canada. Contenders for the 200 trophy should include, with their first entry only, confirmation by a SAC Official Observer, that there were no more than 200 solo hours of gliding time logged at the beginning of the season.

2003
Total gliding time of 200 or less Pilot-in-Command (P1) hours at the start of the OLC trophy season, scoring the best six flights of the year under the OLC Canada (Novice) rules. 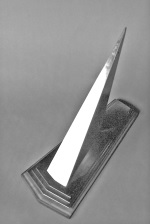 This trophy is awarded annually to the Canadian pilot who has made the best soaring flight of the year.

"The Spike" – designed by Emanuel Hahn – is a gift of the British Aviation Insurance Company to the Soaring Association of Canada. It is an abstract sculpture of aluminum, stainless steel and lucite satin finish).


Original Formula (1954)
"It is considered for the longest crosscountry flight, but only flights over 35 miles are counted. If no flight of 36 miles or more is made, the trophy is awarded for the greatest gain in altitude achieved in Soaring flight." Later criteria reward either flight distance or height gain. The distance score recognizes factors such as task declared/undeclared and record/or not. The flight has to originate in Canada.

This trophy is an original design which features a replica of a gull in flight beside granite chips, arranged to give the impression of a cliff, encased in a block of clear perspex. Outside dimensions – 6" wide x 5" deep x 14" high. 1969 Trophy was proposed by Kerry Bissell of the Edmonton Soaring Club, designed by Jim Carpenter, of SOSA. The historical information is found on the next page "Jonathan Livingston Seagull".


1987
Trophy was retired by the Air Cadet League of Canada and returned to SAC. It is now awarded to the youngest SAC junior member earning the Silver badge that year.

1996
Association's directors decided to give this prestigeous trophy a new life: It will be presented to the youngest pilot under the age of 21 who earns the Silver badge. The new name was to be the Silver C Gull.

The trophy is an abstract representation of soaring flight. It is awarded to the pilot who scores the highest on his five best flights of the year originating in Canada.

Original Formula
1949-1962 The National Championship was awarded to the pilot who scores highest on his five best flights of the year, originating in Canada. The pilot had to include one distance flight of not less than Silver C distance; he may not turn in more than one duration flight for soaring."

Basic scoring – one point per airline mile, one point per 150 feet free climb, ten points per hour free flight
Each flight will be given a point value for either distance, altitude or duration, whichever results in the highest point number. Generally, FAI rules apply (a barograph must be carried for altitude points and duration when landing away from base). Certification by a SAC Offical Observer or reliable witness is accepted for cross-country takeoff and landing location, and for duration within sight of a certifying witness.

1963 - 2002
The trophy will be awarded for the best five flights of the year according to above formula.

2003
Best six flights of the year under the OLC Canada rules. Recognition is given to pure glider flights (PG) and (MG) motorglider flights.

The three Dow trophies were given to the Association by Dow Brewery Ltd. The body of the trophy suffered the years of shipping and handling beyond reasonable repair; in 1998 it was decided to keepit "as is" in the SAC treasure box and certificates will serve as the trophy memento. When these trophies were first awarded at the national contests, all of the sailplanes competed in only one class – the Open class.

They were awarded for accomplishment in each of the three following categories:
1975
Standard Class added 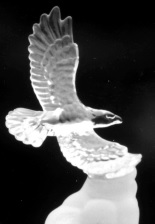 The trophy is a crystal hawk mounted on a granite block with a walnut base – 12" wide, 10" deep, 16" high. The CALPA trophy was presented to the Association on the occasion of their 50th anniversary by the Canadian Air Line Pilots Association and first awarded at Pendleton Ontario, site of the 1995 National contest. That year, the Sports Class was re-introduced through the efforts of contest director Bob Mercer of the Gatineau Gliding Club.


2000
The name Sports Class changed to Club Class to correspond with the new FAI Class in world championships.

2005
Racing Class – 15 Metre and Standard Classes were combined and handicapped to improve the competition. The CALPA trophy will be presented for Racing and/or Club Class.

2009
CALPA trophy will be presented for the Club Class only. The Racing Class has been named FAI Class. A winning non-resident pilot will be declared winner. The trophy is awarded to the top Canadian pilot in the Club Class in a Canadian national contest and declared the National Champion for this Class.

This trophy was presented to the Association by Carling O'Keefe Breweries Limited. It was initially awarded to the team which accumulated the highest score at a national contest. This was during the time when there was only one class at a national contest. After the introduction of championship classes in the Nationals, the trophy is now presented to the highest scoring team competing in any class (rank by % of maximum score).


Criteria
A Canadian pilot of a team, who is competing in any of the championship classes, is eligible tobecome the National Champion for that class.

This trophy depicts a silver swan soaring to a cumulus cloud – an upright carving in black walnut – height 16 inches. The trophy was designed, crafted, and donated to the Association by Christine and John Firth, of Ottawa, in memory of Wolfram Mix (1925-1972) who was killed in 1972 while competing in the XIII World Soaring Championships, in Vrsac, Yugoslavia. The trophy is a tribute to his outstanding performances in international soaring competition. Until 2002, the trophy was awarded to the top Canadian pilot of the Standard Class competition in a Canadian national contest and declared the National Champion for that Class.

2009
Standard and 15m Classes have been combined and renamed FAI Class. Scores are handicapped. A winning non-resident pilot will be declared winner.

The trophy is awarded to the top Canadian pilot in the FAI Class in a Canadian national contest and declared the National Champion for this Class.
A complete list of the trophy winners from year's past can be found in pdf  The Book Of The Best (2013) (773 KB)